In 1955, Pilgrim Lutheran Church (established in 1930) moved from its site on Shelby and Minoma to a new sanctuary building on Gardiner View Avenue, the location of the current Resurrection Lutheran Church. A small parsonage was also built next to the church at that time.

By 1957, a consolidated Lutheran elementary school, Martin Luther School, was formed and two large buildings – a classroom building and a gymnasium – were built on Pilgrim’s property. These buildings belonged to Martin Luther School, not Pilgrim, but Pilgrim was one of four congregations that were partners in the consolidated school. (The others were Concordia, Redeemer, and Peace.)

In 1989, Our Savior Lutheran Church opened a school in a new facility located at the Church’s site off of Shelbyville Road. Martin Luther School was then closed. Its classroom building was vacated, and, with little or no use or care, began to deteriorate. The gymnasium was used some, but it also deteriorated to an only slightly lesser extent.

During the following years, Pilgrim also began to diminish in size. In addition, the parsonage was no longer used for housing and was only used for Sunday School and other activities on a very limited basis. Finally, in the summer of 2006 the congregation voted to close and to sell all of the property (church, house, classroom building and gymnasium). A hotel company made an offer contingent on getting zoning permission for a four-story building, and this offer was accepted. After a year this company pulled out of the deal because the zoning was not approved. During that year, several things were given away including the bell and the electronic organ. The church’s more modern off-site parsonage was donated to Cedar Lake.

At this point, local LCMS pastors Lehenbauer (Divine Savior), Richeson (Faith), and Peters (Concordia) requested of the Indiana District, the local Federation, and others that an effort to begin a new mission congregation at the site be approved. It was agreed to allow some preliminary steps. A Christmas Eve service was held in 2007 which 60 people attended and completed a questionnaire. The results were encouraging, and soon thereafter Sunday services began. The officiant for these Sunday services was Rev. Dan Keinath, a recent seminary graduate who was in Louisville pursuing a graduate degree in marriage and family counseling. Those services continued under his guidance until the summer of 2009, when he took a call to Minnesota. During this period, there was some organization of the small group of worshippers; only a half dozen or so from Pilgrim stayed but a few others become involved. Resurrection was chosen as the name and officers were elected. In general, people who worshipped there were placed on the roster of Divine Savior. The Indiana District formally allowed Resurrection to take ownership of the property assuming a $50,000 loan left from Pilgrim’s effort to sell the property.

In early autumn of 2008, a terrible storm hit Louisville and tore off about a third of the roof of the gymnasium. Rev. Lehenbauer led a successful effort to repair the roof, but a $100,000 loan was needed to cover the costs. There were other damages to the roof of the fellowship area of the church building – both from this storm and from a later storm. The repairs for the church building were covered by insurance, but it would be 2012 before those repairs could be completed satisfactorily. Eventually the gym could be rented out for parties and for athletic groups; rental for athletic groups (but not for parties) has continued up to the present.

In the summer of 2009, arrangements were made with Paul Nickel, a Director of Christian Education at Our Savior and a former principal of Martin Luther School, to handle the preaching at Resurrection and to take care of some other basic pastoral needs. Pastors Lehenbauer (until he took another call later in the year), Richeson, and Peters (who retired from Concordia that summer) assisted. The mission drifted somewhat and definitely needed pastoral leadership from someone focused on Resurrection. At this time work was done on the parsonage on campus, and some income from that rental was also realized.

In the spring of 2010, Concordia offered to apply for a vicar who would focus largely on Resurrection. The first year of a five-year District mission support subsidy was used along with financial assistance from Concordia, but this District subsidy has not continued. Tim Faile of the Ft. Wayne seminary was assigned. Pastor Boyd (Concordia) supervised the vicarage. He worked on various projects including developing a suitable constitution.

In the fall of 2011, Dale and Tonja Oelker from Indianapolis visited the area to see about finding a home for a new branch of “Kids Against Hunger,” a not-for-profit organization that uses volunteers to pack nutritious dried food meals to be shipped and given to needy peoples throughout the world. They chose Resurrection and established their office, storage, and packing site in the gymnasium. They also joined the congregation and rented the adjoining house (once a parsonage) for their residence. This effort grew by leaps and bounds. In 2015 it began using an upgraded formula for the meals and became independent, changing its name to “Love the Hungry.” Since its inception, it has packed nearly 5 million meals and has shipped them to Central and South America, Haiti, the Philippines, South Sudan and other parts of Africa, and various countries in Asia as well as to parts of the United States. It is its own 501(c)3, but is also a vital part of Resurrection’s mission.

In the fall of 2012, John Deng Ater and a couple of other people from a local unaffiliated Sudanese congregation visited Resurrection to see if they might make their home there. They had become acquainted with and liked the teachings of the Lutheran Church-Missouri Synod and had met both District executive Geoff Robinson and Pastor Richeson. Their group of about 60 was very interested in worshipping at Resurrection and in exploring becoming Lutheran. They began their Sunday worship in November and by spring of 2013 had received instruction on Lutheran teachings through the Small Catechism. On Easter Sunday 39 adults were confirmed, 9 children were baptized, and 12 children were taken in as baptismal transfers. The goal was to be a single congregation with some joint services and some that would use only English and others Dinka (their language from South Sudan). Most of the adult males were from the “Lost Boys” who had come to the U.S. as refugees in the late 1990’s and very early 2000’s. Wives and children had joined them later. These people were highly motivated to work hard and to improve their education – often through college.

Through the Sudanese members, Resurrection has supported an orphanage program in South Sudan and has reached out to other Lutheran congregations and individuals to help with this. Love the Hungry has sent approximately 1 million meals and other vital supplies to South Sudan. Resurrection has also become involved in an effort by an independent South Sudan church body of approximately one million members to become Lutheran and to have an affiliation with the LCMS. In February of 2017 and again in 2018 Pastor Peters and John Deng Ater, with the blessing of the LCMS administration, went to a refugee camp in northwest Uganda to offer Lutheran training to church leaders. The one-week intensive training each year was highly successful. In 2018 several LCMS leaders in East Africa joined in leading the training.

In 2014 Resurrection began to renovate the classroom building for use as a Mission Outreach Center (MOC) that could be used by the Sudanese, by Love the Hungry, and by other organizations that offer Christian love and outreach. A new roof was put on the building, and electricity will soon be brought into the building after several years’ absence. A loan of $50,000 was taken out for this project, and approximately $75,000 has been donated. It should be mentioned that improvements and repairs have also been made on a regular basis to the church building, the gymnasium, the house, and the property. In late 2018 electricity and plumbing are being installed. A Hispanic Christian congregation began worshipping in 2018 in the gymnasium and is planning to move into two classrooms of the MOC when it is ready. The Sudanese will also be using two of the eight classrooms.

Because the number of Sudanese children has grown, efforts were made in 2015 to begin a Sunday School program for them and to emphasize VBS. In the fall of 2016 Deaconess Margy Whitsett was contracted to help with ministerial services to women and children with special emphasis on the Sudanese. She has developed a wonderful Sunday School program with attendance averaging approximately 25. She has also helped organize a Sudanese LWML chapter. It should be mentioned, too, that the Indiana District LWML has given a grant of $5,200 for furnishing two rooms for the Sudanese in the MOC.

In the summer of 2017 Rev. Chris Weber, his wife, and his four children joined. He had served a congregation in Virginia for approximately 3 years but was not serving a parish when they joined. He began to assist Pastor Peters occasionally and was then hired at the beginning of 2018 on an hourly basis (up to 20 hours a week) to work with Pastor Peters. In early 2019, Pastor Webber received a call to St. Peter Lutheran in St. Paul, MN, which he accepted. He was a big help to Resurrection during his time there, and he felt it was also quite beneficial to him and his family.

In the summer of 2019, Pastor Peters, who was nearing his 77th birthday, retired from his part-time pastorate at Resurrection. During the vacancy, Circuit Visitor Rev. Chuck Fausel has worked with the congregation to coordinate everything. Leading the morning worship services has been shared by Rev. Curtis Peters and Rev. Mark Whitsett (Margy’s husband). Deaconess Margy Whitsett has continued to serve many of the other congregation needs. John Ater coordinated worship and activities for the Sudanese.

In the spring of 2020, the Covid-19 pandemic forced the suspension of public worship services for approximately 10 weeks. During this time, worship materials were provided electronically to members for in-home worship, and Sunday morning bible study was held on the internet using ZOOM. ZOOM was also used for Council and Call Committee meetings. Public worship and bible study began again the beginning of June with careful health precautions in place.

Finally in the fall of 2021, Pastor John Hallock was called to serve Resurrection as pastor. 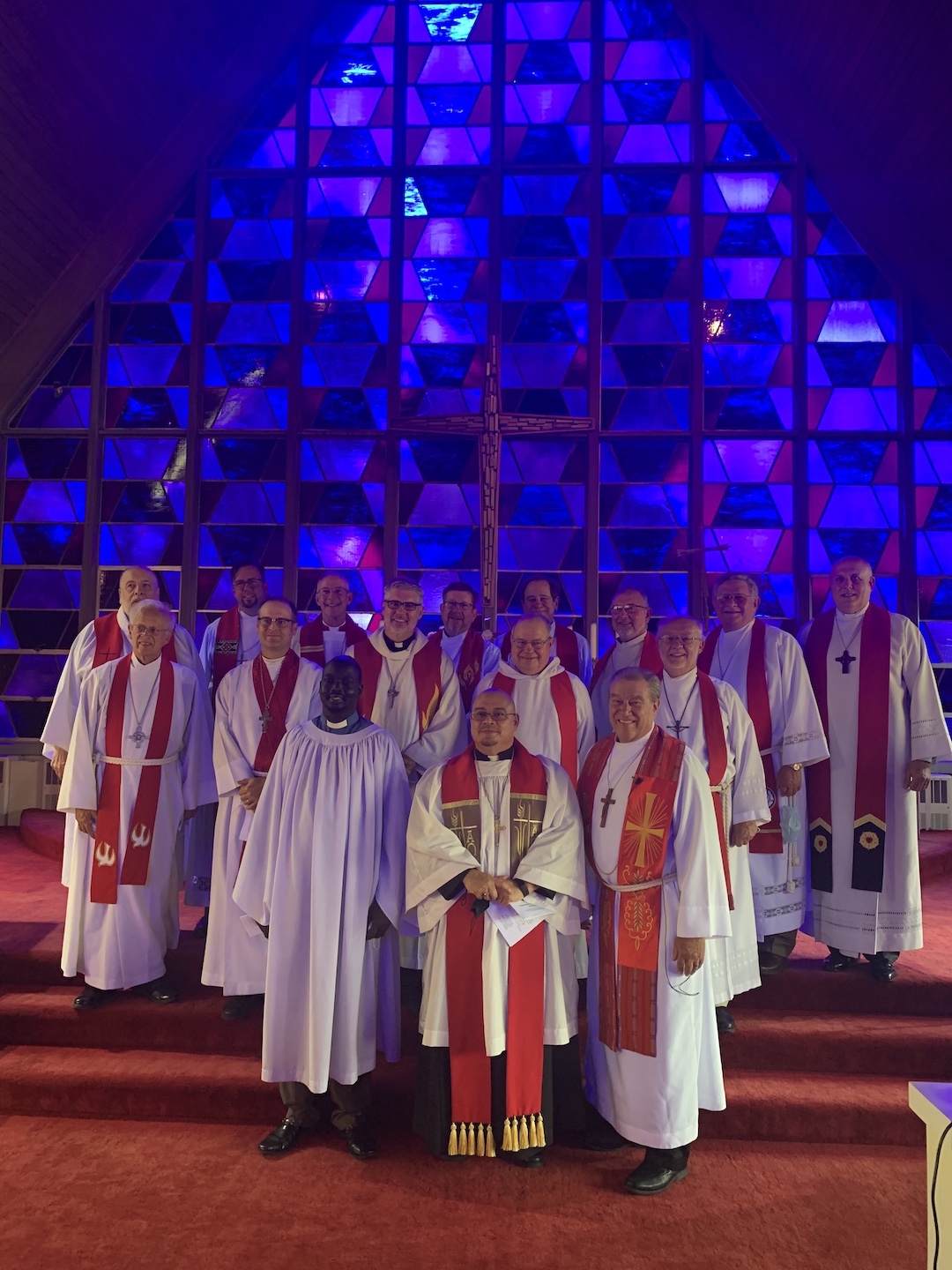